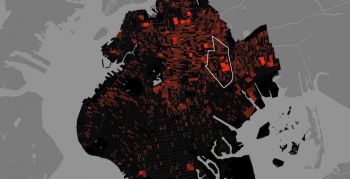 The United States currently has more than 2 million people locked up in jails and prisons. A disproportionate number of them come from a very few neighborhoods in the country’s biggest cities. In many places the concentration is so dense that states are spending in excess of a million dollars a year to incarcerate the residents of single city blocks. When these people are released and reenter their communities, roughly forty percent do not stay more than three years before they are reincarcerated.

Using rarely accessible data from the criminal justice system, the Spatial Information Design Lab and the Justice Mapping Center have created maps of these “million dollar blocks” and of the city-prison-city-prison migration flow for five of the nation’s cities. The maps suggest that the criminal justice system has become the predominant government institution in these communities and that public investment in this system has resulted in significant costs to other elements of our civic infrastructure — education, housing, health, and family. Prisons and jails form the distant exostructure of many American cities today.